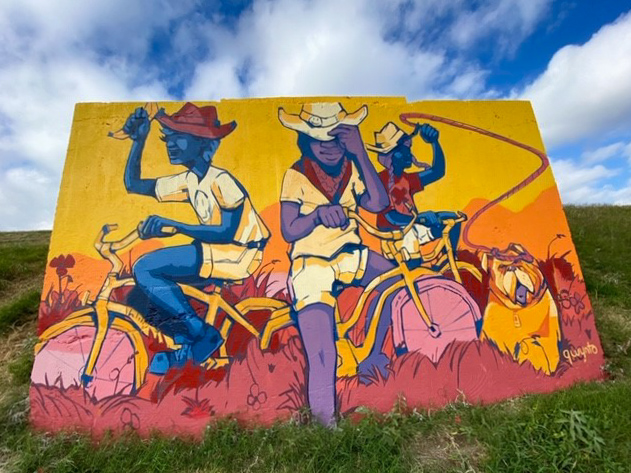 You can hear them Saturday laugh until the end of the day.

This is the kind of emotion artist Zach Kremer is looking for in his mural “Bulldog Rodeo.”

“It is a quirky play on a Texas theme, kids playing on bikes and trying to lasso a large bulldog,” Kremer said, “kids playing with what is available and using their imagination to create games.”

Kremer, trained at the Massachusetts College of Art, said he tries to explore the interaction of people and their environment by capturing quiet, ordinary moments in his artwork. An illustrator, he’s already done about 10 murals in Memphis. This is his first work outside of Tennessee.

Inspired by the Polish mural artists Etam cru – famous in Europe for their building-size colorful murals that are rich in humor and sarcasm – Kremer said his art reads like a story.

“It wasn’t harder doing the mural, having to work four sides at once was different,” Kremer said of his Trinity Trail artwork, in which he uses his trademark, prismatic palette.

“It’s more of a whimsical outlook on things …” Kremer said.

On the riverside of his Trinity Trails mural are three kids riding their bikes, cowboy hats flapping in the wind. One grasps a banana; another holds a rope. On one side panel a girl stands with her dog. One opposite end, an exhausted bulldog lies in the grass, a bird sitting on his head.

On the back wall are the kids’ butts in their bike seats. Their hands are grabbing the handlebars.

All of it telling a story of kids getting lost in the moment on a Saturday morning.