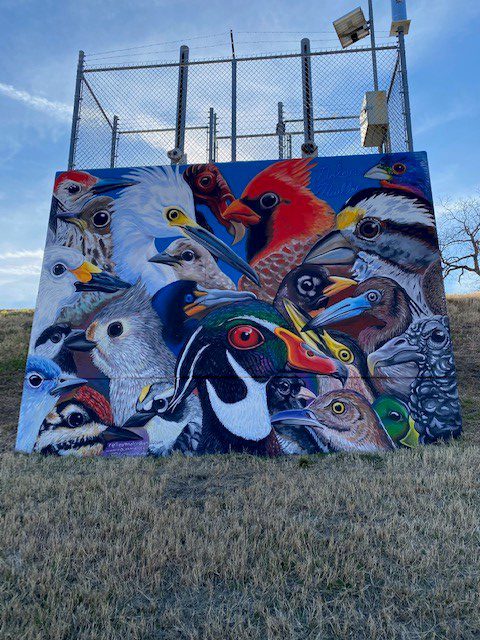 Title of Work: The Birds

How would you describe the stunning collection of 55 bird heads in Nolan Mueller’s Trinity Trail mural, “The Birds”?

Mueller’s mural is a celebration of the Trinity’s diverse bird population, which can be described in many ways. Hence, the piece’s original title: “A Flocking Murder Gang of a Gaggle Dance Paddling a Marathon to the Parliament College Committee to Wake the Flush Drumming Mural.”

But you want to call it “The Birds?” That’s fine.

“I just wanted to pay homage to the nature found in the place, all of these birds can be seen while you’re out on the trails and I wanted to paint something that reflects that beauty,” Mueller said. “I saw about 15 different kinds of birds when I was out there (painting.) That was cool.”

A Plano art teacher, Mueller’s approach to his art is as varied as his feathered subjects. A University of North Texas graduate with degrees in drawing and painting and ceramics, Mueller sometimes uses a realistic style, others times a Salvador Dali, surrealistic approach.

But everything has a certain “Nolaness” to it, Mueller said.

To prepare for this mural, Mueller studied local bird watching websites to pick the species included. There are 55 birds depicted, among them a woodpecker, turkey, heron, Wood duck, vulture, robin, finch and owl. (Look closely, the Painted bunting appears twice.)

To honor each bird and its place in the sun, but to control the scale of the mural’s images, Mueller opted to paint just their heads. The result is an eye-catching, but still not distracting, piece of art. He said he just “wanted it to be something that adds to the beauty of the space.”\