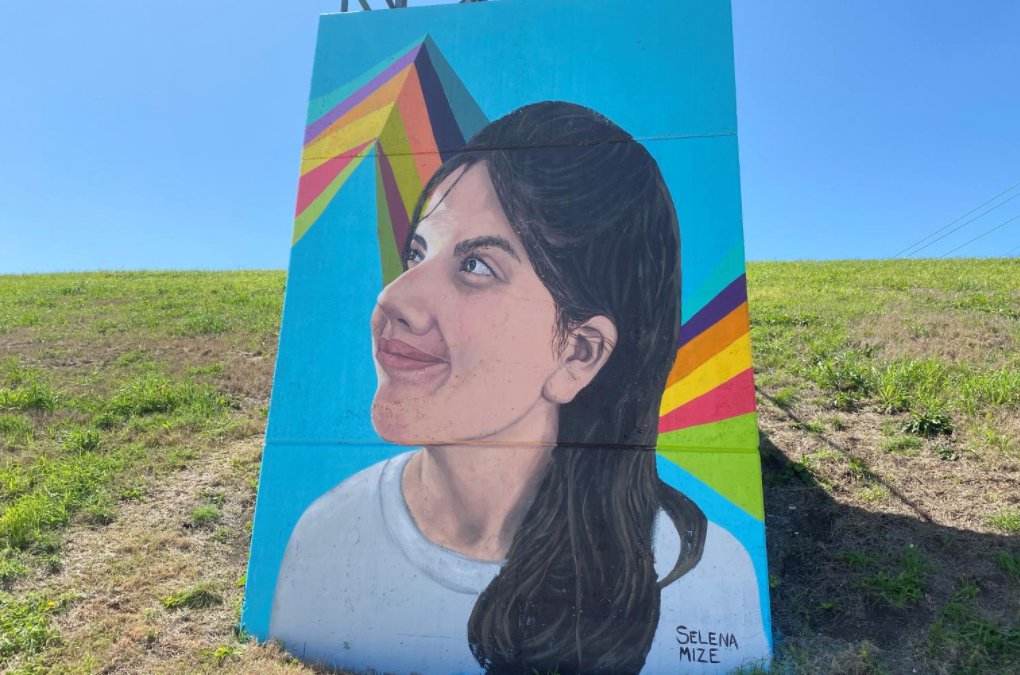 Title of Work: The Cardinal

In folklore, the cardinal symbolizes devotion, loving relationships, unity. The bird’s bright red color and sharp song are an aching reminder that you’re not alone in the world, that someone you love is always looking out for you.

So, it seems only natural that Selena Mize would include one in her Trinity Trail mural of her little sister, Sada, the small-town girl serving in the Navy overseas. The cardinal shows that while her sister is far away, Mize still holds her close.

“It’s the first time we’ve really been apart and it was hard when she left for bootcamp, and then the destination she’s at now,” Mize said. “She’s with me in spirit. When I see a cardinal, I think of my sister.”

Mize and her sister grew up in Burkburnett, a small town north of Wichita Falls. While she started drawing as a toddler, and had always been drawn to the visual arts, Mize didn’t start painting until she attended Midwestern State University.

Mize’s portraits and murals typically include a realistic image surrounded by colorful geometric shapes that build on the mood and the emotion of the subject. A laughing boy is surrounded by rectangular blocks of yellow, orange and red. A pensive woman seems to be emerging from a cascade of blue hexagons.

Building on that style, Mize has done about 20 murals in the past few years. The most noteworthy celebrates Roy Orbison in Vernon. The massive mural honors a hometown son with streaks of sunshine coming from a Sun record label.

In “The Cardinal,” a jagged rainbow of Sada’s favorite colors moves through the vibrant blue sky behind her portrait. Sada – her name in Japanese means “pure one” – looks off into the sky with a small smile. She doesn’t know what to expect.

And where is the cardinal? It’s perched off to the side on a smaller structure. The cardinal is there to remind Sada that her family is watching over her.